Starting from version 2.6.58, facets in Molflow+ can have angle maps. 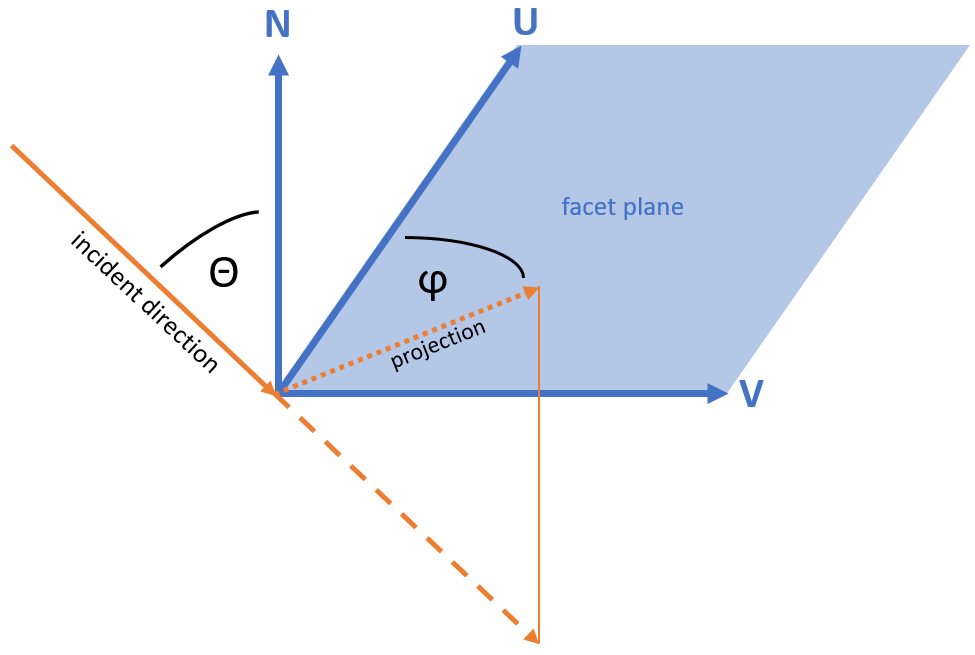 Note: a facet's U vector is its longest side by default, which can be rotated with the Facet / Shift Vertex command. You can visualize the U, V and normal vectors by selecting a facet and enabling these view options through the checkboxes in the upper right corner.

Just like for any one- or two-dimensional distribution, before creating an angle map, we have to decide the resolution. To make things more complicated, there are often situations when - due to beaming effect, for example - most of the incident particles are nearly perpendicular to a facet. Sampling the near-perpendicular part in detail would require to create a very large angle map, most of which would be a waste of space (the non-perpendicular parts). To solve this, the following parameters describe an angle map in Molflow: 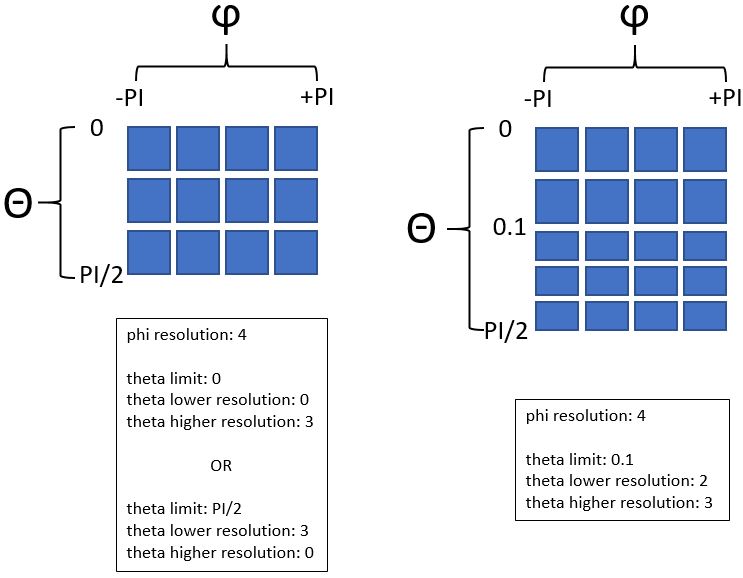 To start collecting incident angles on one or more facets, you have to input these parameters in the Incident angle distribution panel of the Advanced facet parameters window (you might need to expand this panel first):

Note: even if you've enabled the Record checkbox and clicked Apply, the status label will say "No recorded angle maps". This is normal: you have just initialized the map, but the recording will only happen once the subprocesses synchronize with the interface, i.e. when you click Begin.

Important: if you change the angle map parameters (like the resolution), Molflow+ will reinitialize the map - the old recorded map will be overwritten.

Angle maps can be large. Although a dediceated viewer interface withing Molflow is planned, currently the easiest way to read a recorded angle map is copy it to the clipboard and paste it to Excel.

You can optionally use Excel's conditional formatting option to assign color-codes to the cells.

Each column belongs to a certain azimuth (phi) angle: the column headers mark the centerpoint (mid-value) of the bins.

Each row belongs to a certain elevation (theta) angle: the values in the first column are therefore the cetnerpoints of the bins. In the example screenshot above, the second row has a header value of 0.03 radians, therefore values in that row show the number of hits between theta=0.02 and theta=0.04 radian incident angles (with the displayed theta=0.03 radians the centerpoint).

Important: there is a difference between the angular distribution in a volume and those sampled on a facet. For this, read section 2.8.0.5 (angular profiles) of the document "The algorithm behind Molflow" on the Molflow documentation page. 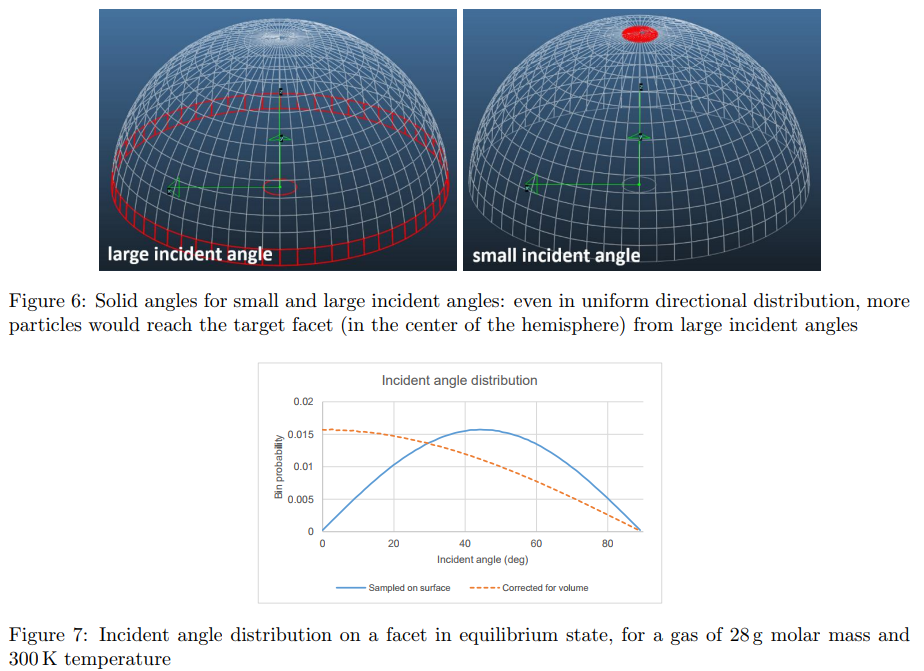 Difference between angular distribution in the gas and sampled on a facet. Click for full size

Instead of copying to clipboard, you can select one or more facets and export them to external files. This will allow later to reuse these sampled distributions for particle generation. If you select multiple facets, the filename you specify in the Save As dialog will get a suffix with the facet number. For example, selecting facets 1,5,7 and exporting with the name "distribution" will create three files:

Recorded angle maps are saved with Molflow files (when saved in XML or ZIP format). You can, however, import CSV files to any selected facet, therefore you can reuse a recorded angular distribution in a different geometry, or even create your own distribution. If you create your own angle map, you can choose between two formats:

In this case Molflow will assume equal spacing in both directions, so you need to create a simple CSV file where...

Allows to include a theta angle limit (different lower and higher resolutions) and to load exported angle maps directly. The format must strictly match that of the exported files, since Molflow+ has to figure out the angle map parameters (resolution, theta limit, etc.) solely on the header row and the first column values:

Important: once again, it is necessary to understand the difference between angular distribution in the gas and on a facet. In general, on a facet, every value is weighed by sin(theta), the solid angle belonging to that elevation. A cosine distribution would therefore be sampled (and generated as) sin(theta)*cos(theta). 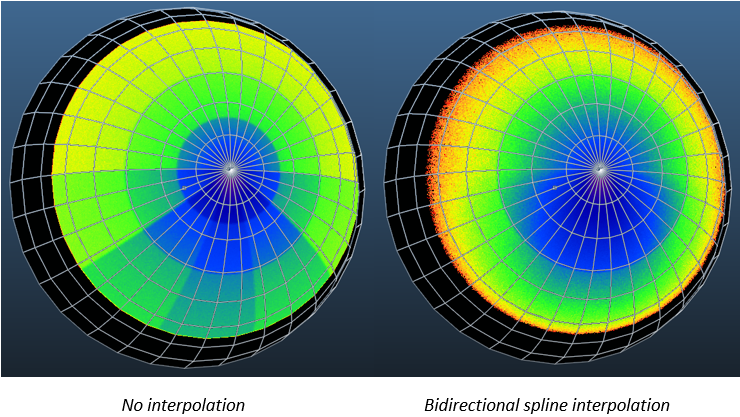 Generating according to a recorded angle map

Once a facet has a recorded angle map (either through recording or through importing), set up a desorption by selecting the Recorded angular option and assigning a desorption value (which can optionally be a time-dependent parameter):

Important: you must either record an angle map or use it. When setting up a facet desorption to use the Recorded option, disable the Record checkbox in the advanced parameters, otherwise you'll receive an error:

Switching from recording to generating

If you want to sample the angle map on a facet then immediately generate from it (for example in case of a sequential simulation), it is important to do as follows: 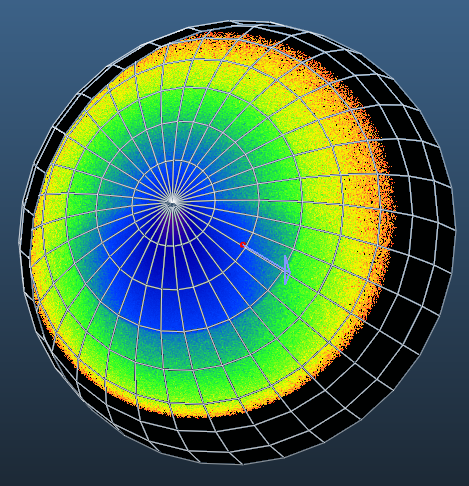 In this example Facet257 in the centre of the hemishpere generates according to the following angle map: